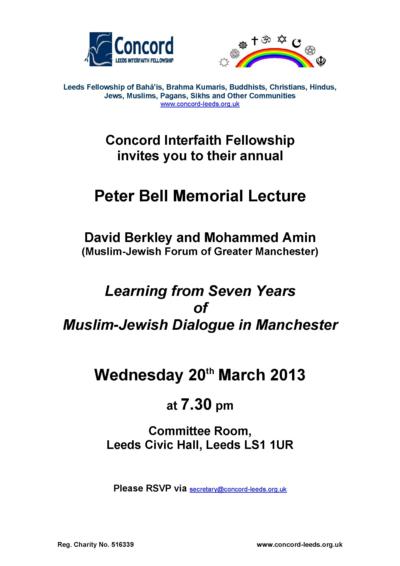 Dr Peter Bell MBE was a founder member of Leeds Concord back in 1976 and served as General Secretary until his death in 1999. Since 2010 Leeds Concord has held a lecture in his memory. It was a great honour for David Berkley and Mohammed Amin to be asked to jointly give the 2013 lecture. They chose to talk about what they have learned from their experiences with the Muslim Jewish Forum of Greater Manchester.

They spoke from a written text which is reproduced below. However the text does not fully reflect the evening as they added a great deal of additional detail and colour during delivery. After the talk there was a question and answer session.

Learning from Seven Years of Muslim-Jewish Dialogue in Manchester

Thank you for inviting us to give this lecture. As well as being an honour, it has provided us with the opportunity to look back and reflect and assess what we have achieved with the Muslim Jewish Forum of Greater Manchester.

After the talk we will be delighted to take questions. We propose to cover the following:

Before the Muslim Jewish Forum 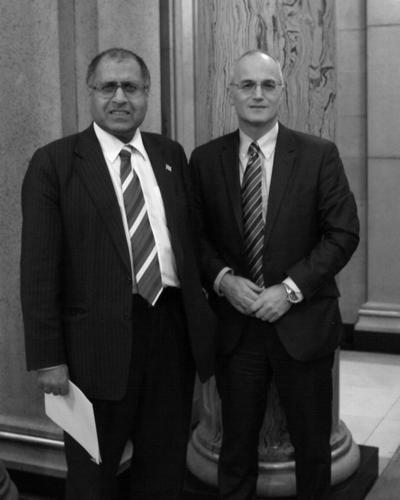 Mohammed Amin had lived in Manchester since 1952. At school some of his friends were Jewish, particularly since Muslims and Jews were exempt from attending the school assembly instead spending their time sitting together in the sixth form common room. One of his close circle at university was Jewish and of course professionally he had both Jewish colleagues at work and Jewish clients. One of those clients invited him to a Seder at his home near New York City in 1994.

However despite being aged in his early 50s, at the time that the Muslim Jewish Forum of Greater Manchester was set up, Mohammed Amin had never set foot inside a synagogue. He also knew no Jewish people socially.

David Berkley was born in Israel but had lived in Manchester since he was 7 years old. Growing up in the Orthodox Jewish community and attending religious schools and Yeshiva he had little social contact with non-Jews until University. Since then in the course of his professional practice he came to into contact with and developed good relations with clients and colleagues from the Muslim communities in the North West of England.

Sensing that there was an urgent need for better understanding between the faith communities David Berkley helped to establish a grass roots initiative in Bury and was a founder of the Muslim Jewish Forum.

How the Muslim Jewish Forum of Greater Manchester came about

Back in 2004 Mohammed Amin received an invitation from Manchester Town Hall which came from the Deputy Lord Mayor, Councillor Afzal Khan. That was not a surprise since he was a long-standing friend. The invitation was to listen to two individuals from London, Rabbi Herschel Gluck and Ismail Amaan, talking about their Muslim Jewish dialogue group in North London. Co-hosting the event was Mr Henry Guterman MBE, a former president of the Jewish Representative Council of Greater Manchester.

At the event, Rabbi Gluck explained that he had become conscious that he had no contact with the Muslim community in his area. He decided to take direct action by going to the nearest mosque and ringing the doorbell!

Apart from the talk by the visitors and the questions and answers, there was no direct outcome from the meeting. However a few months later Councillor Afzal Khan and Mr Henry Guterman called another public meeting to discuss whether we should set up a similar forum in Manchester. There was general support and the small number of people volunteered to help set it up. Mohammed Amin and David Berkley were among them.

Given that David Berkley is a lawyer and Mohammed Amin is an accountant, it was natural for the two of us to be given the task of drafting the constitution. Equally inevitable given our backgrounds, we produced the most formal kind of constitution imaginable, by incorporating a company limited by guarantee. Despite Mohammed Amin having practised as an accountant for many decades, this was the only occasion on which he has formed a company "by hand" as opposed to contracting the task out to company formation agents. However it meant that forming the company cost only the registration fee of £40 plus the costs of purchasing a company seal and some statutory books which came to about three times as much.

Specific features that we built into it

Many people assume that the natural role of Muslims and Jews is to be at loggerheads with each other. This view is of course formed from an awareness of the Middle East conflict, and the way that conflict has unfortunately been imported into countries like Britain, corroding relations between Muslims and Jews in this country.

When planning the forum we realised that if we had formal discussions about the Middle East, we would never talk about anything else because the subject would take over everything else. It is of course also immensely divisive between Muslims and Jews. Finally we were conscious that sitting in Manchester neither the Muslim nor the Jewish communities had any power to change what was happening in the Middle East, let alone bring about peace.

Accordingly we restricted the aims and objectives of the Muslim Jewish Forum very specifically. It is worth reading out the key clause from our memorandum since it is quite short. This is clause 3.

The key point about this objects clause is that it is entirely local. The Middle East is out of scope.

Obviously all of the rules regarding membership of the Forum and the executive committee, such as having two co-chairs, were designed to ensure parity of treatment between Muslims and Jews.

Mohammed Amin had a private concern that the forum might be excessively dominated by Muslims since there are about 10 times as many Muslims living in the greater Manchester area as there are Jews. However the experience was the opposite; there were far more Jews interested in having dialogue with Muslims than there were Muslims wanting to talk to Jews. There are several reasons for this imbalance in Mohammed Amin's view:

Accordingly, especially in the early days, there were far more Jews at Forum events than Muslims.

In the summer of 2006 Muslim attendance plummeted as a reaction to the war in Lebanon between Israel and Hezbollah. The same thing happened during operation Cast Lead at the end of 2008/beginning of 2009. However in both cases the forum simply persevered and Muslim attendance grew back up. We're now at the stage where Muslim attendance is catching up with Jewish attendance.

Some of the things that the Forum has done

We started off with some basics and have always allowed practicality to guide us. Nowadays each significant event that we do is recorded on our website using the text of the press release that we issue after the event. These press releases make a difference by themselves since they are often picked up by the Jewish and Asian press, thereby helping to spread the message that events are taking place which involve the Muslim and Jewish communities coming together in harmony.

Without wishing to read out an endless list, some of the more notable things that we have done are as follows:

A full list of events held since the Muslim Jewish Forum set up its website can be found on the past events page. The speakers mentioned some of the events as they extemporised.

Almost as important as the formal events organised by the forum are the other things that have happened because the forum brought people together and created connections.

From the earliest days of the forum, David Berkley and Mohammed Amin have given talks to Manchester Limmud, Liverpool Limmud and Leeds Limmud on a variety of topics. These have included Muslim Jewish dialogue itself as a topic, our different attitudes to conversion and what Jerusalem means to Muslims and Jews. This last topic illustrates our approach quite well; when David Berkley suggested to Mohammed Amin that we talk about Jerusalem, Amin immediate reaction was that we were not going to have a presentation where each of us stood there claiming "my connection to Jerusalem is better than yours!" Accordingly Mohammed Amin spoke about the Jewish connection with Jerusalem while David Berkley spoke about what Jerusalem means to Muslims.

A small group of people, three Muslims and three Jews, decided to visit Krakow and Auschwitz together. Afterwards Mohammed Amin wrote a blog about the visit and an article for the Jewish Chronicle, both of which can be found easily on his website. Five of the six have taken other holidays together; so far they have been to Granada and Marrakesh. Dubrovnik is next.

Mohammed Amin was invited by David Berkley speak at an Israel advocacy conference in Manchester "The Big Tent for Israel" at which he talked about how supporters of Israel should promote its cause with Muslims.

How we think we have made a difference

We have now been legally constituted for almost exactly eight years, since our date of incorporation was in June 2005.

In that time we have, we believe, achieved the following:

Recently The Manchester Islamic High School for Girls and King David’s School in Manchester entered into a formal twinning arrangement, starting with a visit of the girls to King David’s. What is important about that in our view is that the Muslim Jewish Forum had zero direct involvement in setting up the contacts and the twinning. What the twinning demonstrates is that more Muslims and Jews in Manchester now regard such activity as normal. We claim the credit for having changed the atmosphere.