We organised our annual Iftar, the meal after a day of Muslim fasting, on Sunday 18 June. Khizra Mosque on Cheetham Hill Road in North Manchester kindly hosted the Forum's  event this year.

There was an impressive line-up of speakers which included three Mayors. The speakers were:

All of the speakers offered their perspectives about the need for unity. Each stressed the need for mixing together and learning from each other in these difficult times when the evil behaviour of a bigoted minority tries to divide peace loving people.

Andy Burnham spoke of the hope and togetherness of Mancunians that emerged following the terrorist atrocity last month. Mohammed Amin spoke about the individual responsibility to combat antisemitism and Michael Rubinstein spoke about combating anti Muslim hatred. Sajjad Amin of the host Khizra Mosque gave a presentation about Islam generally and fasting during Ramadan and also about the Mosque's extensive outreach work in the wider community

The event was attended by over 60 people of all faiths.

Many were attending their first Forum event including Bev Doyle and her family. She stated "It was an excellent night with inspiring speakers, lovely food and a very welcoming atmosphere. I am looking forward to attending more Muslim Jewish Forum events this year"

Sajjad Amin said "It was a fantastic evening and I met some lovely people. The Muslim Jewish Forum is essential, and coming together at events like this can only be beneficial for our respective communities. Visitors were able to gain a better understanding of some of the outreach work mosques such as Khizra carry out in the community. I look forward to working with the MJF again in the future." 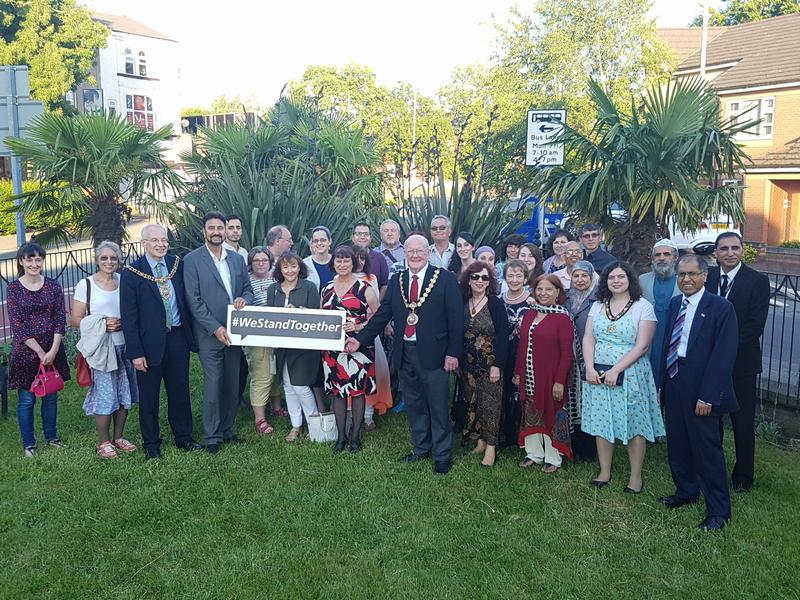 The photograph (click it for a larger image) above was taken before the event in the Peace Garden in the grounds of Khizra Mosque and shows most of the speakers.

Thank you, Heather, for your kind introduction. I am Michael Rubinstein and I am honoured, to have been asked to speak about combatting Islamophobia.

When I was asked to speak I thought at first that it would be straightforward, all I would need to do would be to talk for a few minutes, saying how awful it is how unfair and unjust and then say that, as a Jew whose family were refugees from Europe, I could completely empathise.

But then I thought “I’m not a Muslim so what do I know of Islamophobia?” I was brought up in a family which came from central Europe, not North Africa, the Middle-East or the Indian subcontinent. We ate chopped liver and bagels not kebabs and chapattis (not at home anyway). What do I really know of Islamophobia? I didn’t know the history, how it manifests, how it feels.

Finally this morning I sat down and I went back to first principles. And this is what I came up with.

First the definition of islamophobia

A phobia is “an extreme or irrational fear of or aversion to something”. When I looked up “Islamophobia” the dictionary said “dislike of or prejudice against Islam or Muslims”.

So that’s the definition. The next questions are

These are difficult questions which, I am sorry, I do not have any simple answers for.

Going further I looked up other phobias. Homophobia, the dislike of or prejudice against homosexual people. Gingerphobia, the fear, dislike or hatred of people with red hair (this is a real thing believe it or not). It seems that as a species we spend an awful lot of time fearing and disliking the “other”, those who seem different from us.

I learned some of the history of the stereotyping of Muslims.

We know that the irrational fears have changed over time. A hundred years ago, in the film of Rudolph Valentino, The Sheik (who was assumed to be an Arab Muslim), he was depicted as a great lover and at this period of history there was a fear whipped up in society of “white” women being trafficked into slavery in “harems”. We know that is not a prevailing story in modern times, however there is still an irrational racist fear of “the other”.

Some say that Islamophobia has its roots in the years of conflict in the Middle East, Iraq and Iran, Kuwait, Lebanon, Yemen, Israel/Palestine, Syria and others, the roots of which are far more complicated than I can deal with but we all know go back much further than the lifetime of anyone in this room, back dozens of generations.

These conflicts are far from over and we shouldn’t avoid dealing with their consequences.

We do know that some fear is rational.

There are genuinely violent and dangerous people on the streets, such as the person who murdered Jo Cox, Baruch Goldstein who murdered innocent people in Hebron and the bomber at the Ariana Grande concert here in Manchester.

There are many in our society who have in mind the so called Islamists who cause mayhem around the world; they are not true Muslims. However if some people believe they are then it may seem rational to them to fear all Muslims. We know that this is not the case, the fear of a whole group of people is not rational; it is a result of ignorance and misinformation.

After the Manchester bombing one of my wife’s colleagues, a dedicated surgeon at a Manchester hospital, who had worked around the clock to save lives, was verbally abused on his way home, he is an observant Muslim. We all need to work together to ensure that people are not abused just because other people lack understanding which creates fear. We know that some of the greatest Islamophobia, and anti-Semitism occurs in communities where there are few or no Muslims or Jews. We also need to work together to eliminate Islamophobia and anti-Semitism within our own communities.

This made me think about what I tell schoolchildren when I go to talk about the Holocaust. I tell them that anti-Semitism is a form of racism and that racism is a lack of respect for our fellow human beings. This is the same with Islamophobia. If we respect each other, if we focus on integration and learning about each other rather than either segregation or total assimilation, keeping our own identities and beliefs and sharing values of honesty respect and acceptance we will be more open to discussing more challenging issues.

Yes, we need to campaign about the issues that unite us such as circumcision, ritual slaughter, faith schools, MRI scans instead of post mortems and we also need to talk about the seemingly taboo subjects such as Israel / Palestine, terrorism, alienation and indoctrination of the young. We seem to avoid these at the moment for fear of causing offence. I believe we can talk in an open and constructive way, through actively listening to each other on a basis of friendship.

I am optimistic, there is cause for hope.

We have seen in the news how both communities have supported each other in challenging times; Muslims have helped with a clean-up of synagogue desecration in Bradford; I read in the Jewish Chronicle how in Kingston the local Muslim community took flowers to their local synagogue for Shabbat this week.

In the same paper we read about how World Jewish Relief had helped and supported Muslims in Syria and that a Palestinian gave a donation to support an Israeli hospital that had saved his life. The Jewish communities have also supported Muslims all across the UK in times of difficulty, we are first cousins so of course we help each other.

Jews, Muslims and others stood together to condemn violence at the vigil I attended in Manchester. In the crowds we were joined together as fellow Mancunians not from different religions but humans supporting each other in grief.

I believe that if we spend more time together understanding each other’s religions and customs, and celebrating our similarities and openly discussing our differences with respect listening patiently to different points of view we will reduce Islamophobia and anti-Semitism together. With the excellent Muslim-Jewish Forum we have made a start on the journey, let’s travel down this road together.

Thank you for inviting me to share this wonderful Iftar celebration.

Good evening, shalom, and assalaam aleikum. As I have only got five minutes, I will get straight to the point.

Today, I want to talk about how we care for the Jewish community.

I meet lots of Muslims who think that in Britain Muslims suffer more racial and religious abuse than any other community. It is not true.

If you think that Muslims suffer more than anybody else, Do four things.

I am not going to stand here and read you numbers, but I have done this exercise. The figures are on my website.

You will find that the average Jew in Britain is 10 times more likely to suffer antisemitic abuse or physical attack than is the average Muslim. Part of that 10 times difference might be better reporting by the Jewish community, but I believe it shows just how much antisemitism there is around.

So, what can you personally do about it?

Secondly, how do you talk about Jews with your children and other members of your family? Are your messages positive or negative?

Thirdly, when you hear antisemitism being spoken by people that you know, or read antisemitic comments on Facebook, Twitter or email, do you remain silent or do you speak up and challenge them?

We will only get rid of antisemitism when each of us refuses to be a bystander when they see antisemitic hatred.